Maximum Leader of the Panamanian Revolution

Omar Efraín Torrijos Herrera is the de facto dictator of Panama. The commander of the Panamanian National Guard, Torrijos took power in a coup d'état in 1968. Because of the American refusal to withdraw from the Panama Canal Zone, he aligned Panama with the Soviet Union during the Cold War. In 1983, these tensions lead to the deployment of the Soviet fleet off the coast of Panama, which threatened the continental United States with nuclear war. The crisis was eventually defused after the success of the Apollo-Soyuz mission caused Ronald Reagan to land Air Force One in Moscow to meet Soviet Premier Yuri Andropov. 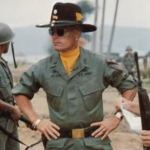