For All Mankind Wiki
Register
Don't have an account?
Sign In
Advertisement
in: Locations, Lunar bases, Moon,
and 4 more

Jamestown is the NASA outpost on the lunar surface. It is designed to be a lunar settlement for astronauts on routine trips, to the moon. It is installed on the rim of Shackleton Crater, not far from the landing site of Seahawk, the lunar module of Apollo 15.

It was launched by a modified Saturn V rocket. It landed on the Moon on October 12th, 1973. The four descent engines, located on the sides of the base, to help it land properly, were repurposed from the lunar modules, as were the RCS thrusters. It was first occupied by the crew of Apollo 21.

Some special features of the base include a working shower and heated cup holders in the galley table. Snoopy decals are placed all over the lockers, with color coding for each astronaut to help keep track of their belongings. Rowing machines, resistance bands and pull up bars are provided for exercise to help fight bone and muscle loss in 1/6th gravity. This also allows astronauts to hop onto the top bunk without a ladder.

Lunar Regolith is spread on top of the base to help shield from radiation. A special air filtration system helps keep the lunar dust out of the station as the dust is harmful to the astronaut's lungs and electronic equipment.

Solar panels cover the roof to provide power to the base. They pivot 90 degrees vertically to catch the sun which is always on the horizon at the lunar south pole. Two side hatches are built into the walls of the base to attach modules for future expansion. In 1983, the base has expanded to have nuclear reactor to provide power and fuel.

By 1983, Jamestown had undergone two expansions, with the expansions most likely being carried by the Sea Dragon. One or both of those expansions were also carrying new living quarters and nuclear power supply. Crews are known by their Jamestown expedition numbers and varied between 4 and 5 personnel. The large Phase III expansion was controversial, after it was made public that the launch was carrying more plutonium for the base's nuclear power source, which had been damaged while being turned off during a solar storm. This flight also carried another reactor intended to make weapons grade plutonium.

The Jamestown number of this mission is unknown, as is the mode of transport, however we do know it launched in 1990.

By 1992, Jamestown had undergone an large amount of extra expansions, as well as a hotfire testing ground for testing new rockets engines, including the K-32 NERVA engine for NASA's Mars mission. Technicians were later sent to oversee the repair of the K-32 engine: this involved replacing it with a niobium alloy nozzle that would cool more effectively in the vacuum of space. This radiative cooling design would be optimal, as long as the nozzle wall thickness was within correct tolerances-too much could be lost in translation.

Jamestown Base during the Apollo 22 mission.

Jamestown Colony from the 1980s.

Jamestown 1994 before launch to Mars

Layout of the Jamestown Base on the Mission Control wall screens. 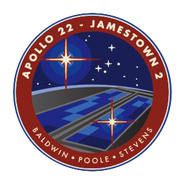 Jamestown crew patches from the 1980s.