For the current season, see Season 3

Apple TV+
For All Mankind is a science fiction and drama web television series produced for Apple TV+. The series stars Joel Kinnaman and created by Ronald D. Moore. It focuses on an alternate timeline where the USSR landed on the Moon prior to the Americans and a world where the Space Race never ended.[1]

The series premiered on November 1, 2019.[2] The series was renewed for a second season on October 15, 2019. The second season focused on the height of the Cold War which in the 1980's as NASA sends marines to the Moon. Prior to the season 2 premiere, the series was picked up for a third season. Season 3 takes another time jump of almost 10 years, focusing on the next big thing - the race to Mars.

Imagine a world where the global Space Race never ended. This "what if" take on history from Ronald D. Moore spotlights the lives of NASA astronauts-the heroes and rock stars of their time and their families. 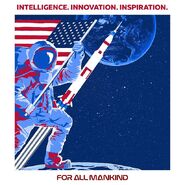 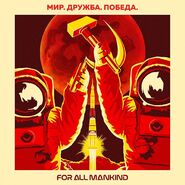 The Alternate Past Of "For All Mankind" NYCC 2019 SYFY WIRE